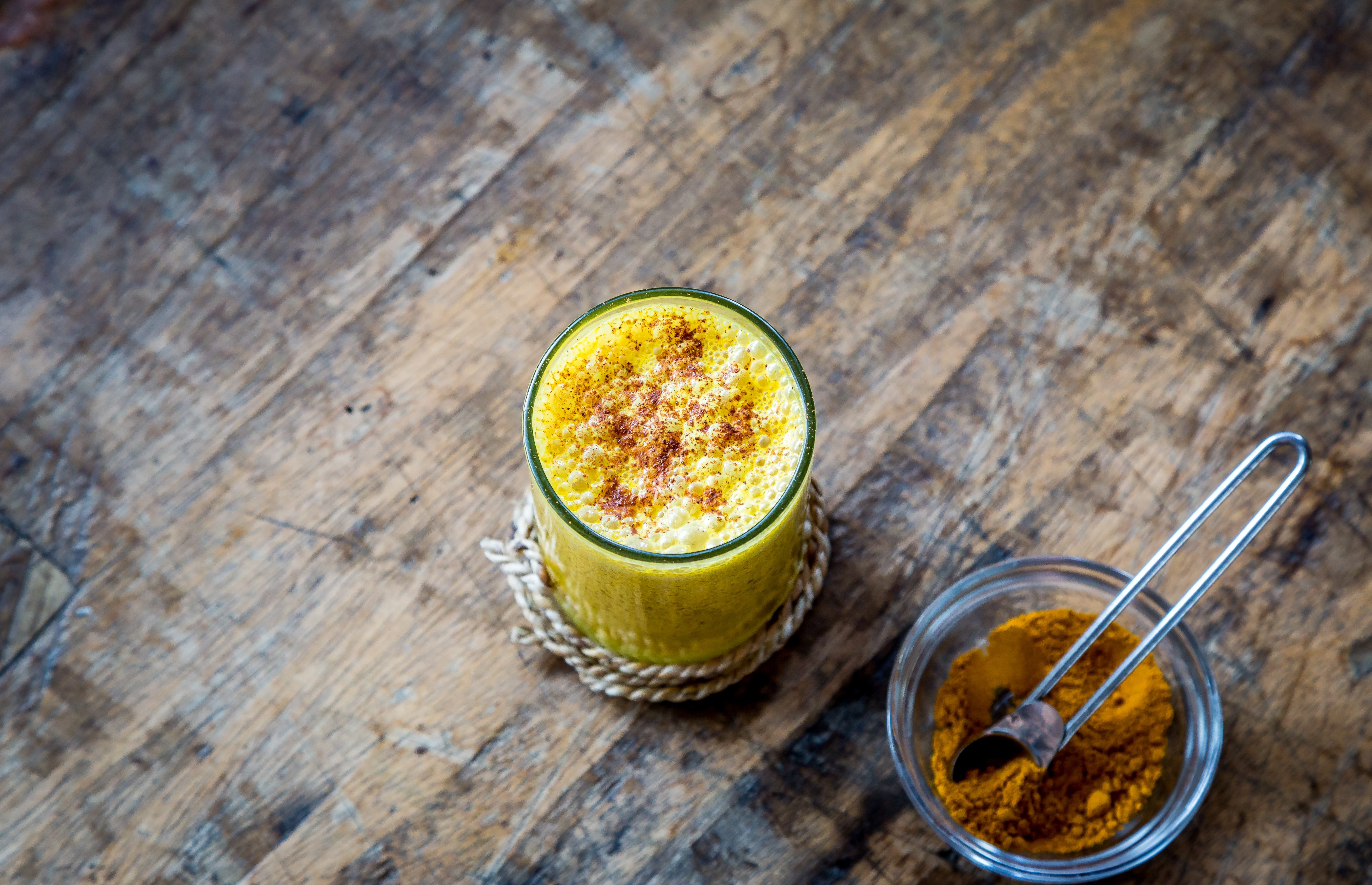 ‘Turmeric’, ‘Curcuma’, ‘Kurkuma’, ‘the golden spice’, ‘the yellow gold’ and ‘golden goddess’ to name but few. This super spice has many names, and just as many, if not more, excuberant healing powers.

Mainly used in Indian cuisine, hailed for its flavour in traditional currys, soups and stews, and due to its amazing deep yellow tone for its great colouring abilities (careful of those food stains); turmeric is but not just a simple spice. Turmeric is a POWERHOUSE, a power-plant with amazing healing and anti-inflammatory abilities, and is one of the most powerful herbs on the planet today to help us humans shield from inflammation, prevent disease, and to keep our bodies strong and healthy.

Curcuma Longa’ which is the Latin name for turmeric, comes from the Arabic name for the plant, ‘Kurkum’ and is a member of the ginger family (Zingiberacea), which includes ginger and galangal.

Turmeric is actually a beautiful tall growing green and flowering plant. The part that is used in cooking as a spice and for supplementation in natural medicine are the fingerlike stalks (Rhizome) that grow beneath
the earth’s surface. Looking similar to the ginger root, when you cut open a turmeric root, you’ll see its blooming yellow, almost orange colour coming out.

If you haven’t cooked with turmeric yet, you might have come across turmeric through the ‘Turmeric (‘Curcuma’) Latte’ trend that has kind of exploded over the past 2 years. Also referred to as ‘Golden Milk‘, plant or animal milk is heatet and then mixed with turmeric powder, honey and other spices such as cardamom and black pepper. Apart from its nourishing and calming taste, a ‘Turmeric Latte’ doesn’t only just taste good, it has many healing benefits for you and your body.

Turmeric has been used as a plant medicine and a healing herb in traditional philosophies such as Ayuveda for over more than 3000 years. Ancient scripts that were written thousand of years ago already talk about the healing power of the golden goddess:

Today modern science has proven turmeric effective through countless studies,
and can confirm what ancient traditions already knew to be the truth for centuries:

The reason for turmeric being able to treat so many different diseases lies in its incredible anti-inflammatory capacity:
Anti-inflammatory means in a very literal sense, for example, to reduce swelling. Say you have been in an accident and sprained your ankle. Chances are high that you’ll experience a swelling of some sort, maybe some redness, tender pain on touching and a warm sensation in the area of the injury. This is simply a natural reaction of your body to induce healing: a natural state of inflammation to induce a healing response. Inflammation can also occur on the insides of our bodies, where we can’t see it, and more often than not, don’t even feel it.

Imagine little tiny construction sites that you’re body is working on constantly at all times to keep you healthy. This is totally normal and happens all the time without us noticing. Inflammation is really a natural process in which enzymes, prostaglandines and other inflammatory proteins (Cox-2, NF-kB, Lox-5, to name but a few) up and down regulate inflammation as part of the inflammatory response pathway. Modern day living however, mainly trough oxidative stress, can cause the inflammation response to ‘get out of control’:

When inflammation becomes a problem:
Our bodies are bombarded constantly with environmental poisons, toxic foods, stress and so forth: too many coffees, pesticides, rushing to work, an argument with the boss, drinking alcohol at night. Holding tension day in and day out, without giving our body the rest it deserves. And suddenly we find ourselves in a downward spiral of uncontrollable digestive issues, auto-immune-diseases or cancer. Scientists now believe that chronic, low-level inflammation plays a major role in almost every chronic, western disease. We have come under so much stress that the standard inflammation pathway can literally not regulate itself anymore efficiently.

Turmeric is hailed as one of the best natural anti-inflammatories in the world today:
Countless studies have shown that turmeric helps to immensily improve the inflammation responses in our bodies, helping us heal quicker from illness and improving the time-span from when inflammation first occurs to its natural conclusion. Thus swellings reduce faster, wounds heal quicker and infections can ease off sooner.

The active compounds in turmeric, one of them being called curcumin, are strongly anti-inflammatory.
In fact, they’re so powerful that it matches the effectiveness of some anti-inflammatory drugs, without the side effects. It blocks NF-kB, a molecule that travels into the nuclei of your cells and turns on genes related to inflammation. NF-kB is believed to play a major role in many chronic diseases.

Furthermore, turmeric and its active compounds dramatically increase the anti-oxidant capacity of the cells in our bodies:
Curcumin is a potent antioxidant that can neutralize free radicals due to its chemical structure. It has also been shown to increase the production of Nrf2, a multi-organ protector that helps our bodies fight ROS (reactive oxygen species). Thus curcumin boosts the activity of your body’s own antioxidant enzymes.

In summary, turmeric and its compounds such as curcumin, have powerful anti-inflammatory and anti-oxidant capacities. With oxidative stress and chronic inflammation being the major causes for modern day health problems, turmeric can be instrumental in helping to fight aging and in preventing degenerative disease.

Role of Nrf2 in Oxidative Stress and Toxicity

Anti-inflammatory properties of curcumin, a major constituent of Curcuma longa: a review of preclinical and clinical research

Hi there and welcome to my page!

My name is Sarah Jay and I love herbs and healthy foods that support and heal delicate bellys and sensitive body types. I am trained in Ayurveda and use ayurvedic principles in my coaching practice, combined with naturopathy and a very intuitive mind-body practice. Health doesn't just come from what you eat, but it stems from a deeper understanding of knowing yourself, understanding yourself and being in tune with yourself.